Inside the Bowels of
The Jeremy Kyle Show

He's a daytime TV institution and an ally of the disenfranchised, but he really likes it when people cheer for him...

What would you do if a middle-aged woman confided in you this: that she used to be a man who took to binge drinking to combat the frustrations of not being female, and that the hormonal confusions surrounding her subsequent sex change had led her to further alcohol abuse and to regularly fly off the handle in violent rages. Most of us would run a mile, but how's this for advice? “You were a binge drinking man – now you're an alcoholic woman.” Meet Jeremy Kyle, whose daytime programme on ITV reels in millions of us every day.

And here’s where it all begins. Huddled together down a damp, dark avenue outside Granada Studios in Manchester queue The Jeremy Kyle Show’s audience and I – waiting patiently to put our own problems at bay so we can be entertained by a talk show host exploiting other people's.

After bearing the rough edge of the rain for an hour, we are led inside and nudged into a seating area, where a woman holding a clipboard lectures us. She has the energy of a Butlins redcoat. “On today's episodes, we have DNA results!” she enthuses, to the giddy murmurings of this eager crowd. “And remember, you must all show your most extreme emotions together, because Jeremy likes it when you cheer for him.”

We practise in unison our gasps, cheers and boos, and I make a mental note of a group of five who seem to be taking this far too seriously as we make our ways into the studio itself. Chaos reigns for fifteen minutes as many of us are made to swap seats in the name of audience balance. Then, suddenly, the man himself emerges. “Ladies and gentlemen, Jeremy Kyle!” announces the floor manager. Everyone goes wild.

Kyle walks across the stage and takes a seat. Then he breaks into a stand-up routine. “My daughter came from school today, and she's started saying a new word – boys,” he says with a smirk. “Well I'm alright with that, because what boy in their right mind will ever want to go near JEREMY KYLE'S daughter?” The crowd cheers and applauds.

“You alright Will, you twat?” he asks the floor manager. “Listen everybody, Will needs a girlfriend. His last girlfriend was quite rough, so he’s after something a bit more classy.”

It continues like this, with Kyle picking people at random, telling them to “get a job!” or asking: “Are you pregnant? Who's the father!?” and revelling in the laughter of the audience. He seems to enjoy referring to himself in the third person for a while, before he finally gets on with the show. 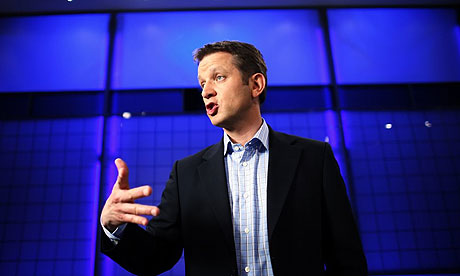 “So let's bring out Kevin,” Kyle announces. In this episode, Kevin will discover whether he is the biological father of his ex-girlfriend Tasha's unborn child. Tasha, who admitted that she “might have slept with someone on New Year's Eve” while they were still together, is confident that Kevin is the father, and that they could still have a future together. Kevin, still in love with Tasha and willing to forgive her, is hoping that he is the father too. You know the drill.

“Kevin,” Kyle pauses as the audience prepare to go live on their gasp rehearsals, “is NOT the father.” Kevin punches the wall and storms off stage. Tasha begins to cry. Kyle offers some banal advice about “using protection in the future” before quickly cutting to an ad break, and Tasha is ushered quickly off stage.

And it's back to Kyle bathing in his own self-importance. “That was very good,” he says to himself. He doesn't need to be told. “Hey, Dom!” he shouts across the studio. A man fiddling with camera wires looks up. “Don't you feel like you owe your whole career to me?”

Kyle disappears for a few minutes, before re-emerging for two more episodes. A few more gasps, cheers and boos later, and the whole thing is finished. The TV crew pat Kyle on the back, and he grins.

If you've watched the show, you'll know that at the beginning, Kyle enters to a cheering, whooping, applauding audience and shakes a few hands. That must be his favourite part, because after all, “Jeremy likes it when you cheer for him.”

Just as the TV crew are about to let us leave, Kyle speaks up over everyone. “One more thing, guys,” he says with a smile, “can we just do the beginning bit again?”